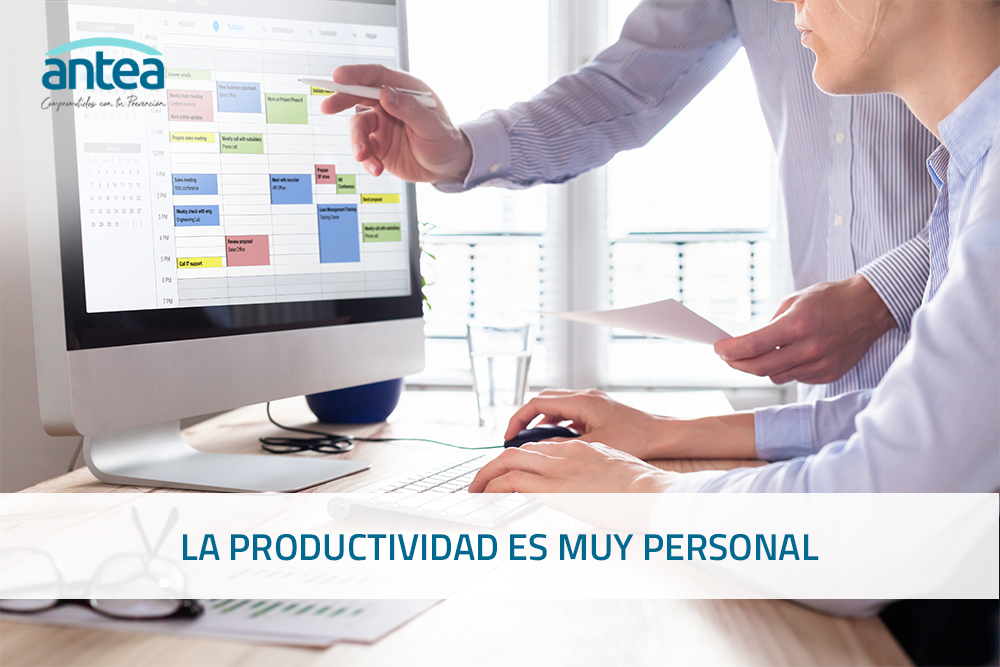 When we talk about labor productivity we mean how efficient a company's production process is. This is a key thing in business results.

Being productive has nothing to do with working at all hours or in multitasking mode.

Whatever industry you work in, productivity improvement is a recurring theme. Companies are committed to applying processes to achieve this, but, of little use, if on a personal level it is not clear how to optimize performance.

There's no one way to be productive. In a much increasingly digital, there are often those who are ashamed of traditional self-adhesive notes, even if it is a system that works for you and you continue to employ. Don't feel guilty about not resorting to one of the countless to-do list apps. One of the reasons for this attitude is motivated by the reflections of most productivity blogs, which have identified this type of Apps as essential.

Everyone has in mind an ideal and productive version of themselves. For many people, that imaginary self is someone who uses a to-do list app.

A productive profile is not one that does a large number of things at once, but the one that optimizes its work processes and manages to finish its objectives throughout the day: the most productive individuals tend to set goals and achieve them at specific times.

Some essential habits to optimize performance.

A highly productive person's first habit has to do with the ability to transform entropy (disorder) into order.

Productive people set and set a number of goals they look like to achieve. One of the techniques used by the most efficient is known as the Pencil Rule. It is about generating decalogs of objectives that make up the real reason for the development

3. Productive people control very well the times they have for each activity

All this is something that must also be implemented in the short term. Therefore, it is essential to manage the agenda that adjusts the objectives to reality: to schedule the goals to be met in dates and times to control very well the times with which they have for each activity, even the necessary temporal slack between them.

To achieve this, it is important to focus attention on one task and, when completed, start with another.

The essential thing to be more productive is to focus on the project, not on each of the tasks that need to be carried out to achieve it. This allows you to quickly recularte if something isn't coming out as expected and change the working method to improve it

To move forward as planned, you have to know how to delegate, entrust tasks to others, automate processes, make quick decisions, ask for help or hire them. The normal thing is to use the benefits offered by technology and work with agile methodologies

The work is usually done as a team. Therefore, it is of little use to draw up a plan if it has not been agreed with those who are part of a common project, inside or outside the office. According to the expert, "this is what is often called the social agenda, as important to achieve results as all the techniques already discussed".

It is essential to have an extensive network of contacts or networking that allows to carry out the purposes in an easy and viable way.

High productivity requires periods of rest and disconnection on a daily basis so as not to run out or lose motivation.

This triggers a progressive loss of productivity and relates to emotions of discouragement, demotion and insecurity in the face of objectives.

"Improvising doesn't fit with productivity:
the enemy of planning is to say yes to anyone's requests"

In addition, labour productivity is conditioned by a number of factors such as the working climate, the flexibility offered by the company, the working conditions themselves, the team manager, etc.

Share on LinkedInShare on FacebookShare on EmailShare on WhatsApp

The particularities of the intensive summer day

The importance of worker training

Committed to your Prevention

We use our own and third-party cookies to ensure the proper functioning of the website, collect information about its use, improve our services and show you personalized advertising based on the analysis of your traffic. You can change the settings or get Más Información sobre cookies
ConfiguraciónACEPTAR
Cookies policy